3D pokies are an incredible phenomenon in the iGaming world, and we have the top leading software developer BetSoft to thank for pioneering their inception.

Entitled Slots3, the line from BetSoft offers pokies players a true cinematic experience with incredible graphics and audio to immerse you into the story – instead of seeing players just tediously spin the reels. However, it is still important we play at encrypted online casinos as we are wagering real money and entering personal information online, which is why we have found the safest BetSoft pokies sites to play their long line of 3D slots at.

While BetSoft is popping up regularly at online casinos everywhere, there are only a few we would trust to enter our personal and financial information at. This is due to their encryption protocols in place and their governing bodies ensuring the software hasn’t been manipulated in the favour of the online casino.

Each casino listed here is available via your Web browser in Instant Play mode – meaning regardless of what browser you use (Firefox, Chrome, Safari, or other) and irrespective of whether you are a Mac or PC user, you can access and play their real money online pokies catalogue and in turn, BetSoft’s 3D games catalogue.

BetSoft have become known for their line of pokies since they aren’t the usual video slots. Instead they offer 3D graphics to immerse the player and they are aptly titled their Slots3 line.

BetSoft are meticulous when it comes to the graphics and audio which ultimately help execute the story line associated to the theme. They invent original themes, or base it on stories we know, such as Pinocchio and Weekend in Vegas (lightly based on the Hangover movie).

To make things even more exciting, they include an array of bonus features and sometimes even a progressive jackpot too. BetSoft are regularly bringing out new additions but at the time of writing some of the available pokies include: 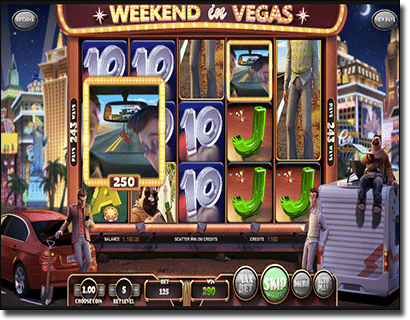 We have picked some of our favourite BetSoft slots from their long list due to their graphics, bonuses, and themes. A Christmas Carol: Who said you can only play Christmas themed slots during the festive season? This Slots3 slot was added in December 2015 and we plan to play it all year round.

It is based on one of Charles Dickens’ most popular novels and features 20 paylines across 5 reels. There are three special bonuses based on the Ghosts of Christmas Past Winning Spins, Present Wilds and Future Winning Spins.

There are up to 12 Free Spins with up to a 5x multiplier in both the Past and Future Winning Spins, while all ghost symbols are turned into Wilds if you land three or more Wilds in the Present round. 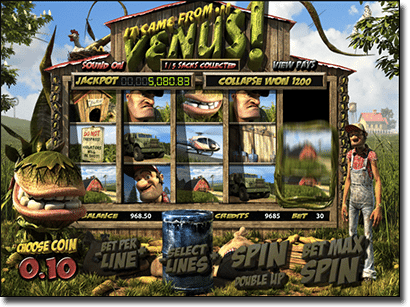 It Came From Venus: BetSoft can get quite unique with their original themes and this pokie is a perfect example.

This slot features 30 paylines, straying away from the standard 20 BetSoft regularly employs, and is based on a farmer named Skeeter. A big flytrap named Butch has landed on his farm, from Venus, and the authorities want to come and take him away to dissect.

Skeeter wants you to help stop them and in return he will reward you with up to 12 Free Spins, a Click Me Bonus where you can win cash prizes, and even Wilds with multipliers attached.

There is also a progressive attached and you can win this by spinning five Butch symbols. 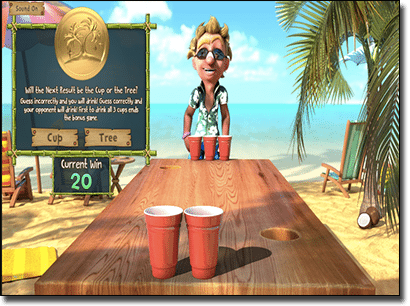 Tipsy Tourist If there is any theme we can relate to it is this one. Featuring the standard 20 paylines across 5 reels Tipsy Tourist is based on a tourist relaxing at the beach who has had one two many – we’ve all been there.

Featuring the famous big red cups where you flip a coin to win and make your opponent drink as well as up to eight free spins and Clingy Wilds – this slot will have you tipsy without even going to a bottle shop.

BetSoft also have a line of 3D poker variants, called Poker3, which takes the same 3D technology we see in Slots3 and applies it to poker to create an immersive, but animated, experience.

They also offer standard table games and even some casual games, such as keno and scratch cards.

BetSoft have selected an array of pokies from their Slots3 line and optimised them for the HTML5 platform. In other words they have made them compatible with Apple, Windows, Android, and other smartphones and tablets, without compromising the graphics or 3D technology.

You will find the available mobile pokies, along with some table and casual games, at the mobile versions of the above sites we have listed.

Simply tap on our links via your mobile browser to get playing.

BetSoft is also governed by respectable bodies, as our recommended online casinos are, including the Alderney Gambling Control Commission and Technical Testing Systems (TST) – a company which specialises in testing software for randomness.

Play at the sites we have listed by following their links and you will be playing in a safe gaming environment where the software hasn’t been manipulated in the operator’s favour.