From playing at the pub, to spinning the reels on the Internet, players can now tap the spin button on your mobile device to play real money pokies on the go. Playing the pokies has come a long way, with mobile play developing rapidly over the past couple of years, and it’s now incredibly easy to access games using your smartphone or tablet.

Whether you have an Apple, Android, Windows Phone or other mobile device you can easily sign up, make a deposit, and play for real money on the go. We feature some of the best mobile sites to play the pokies at, as well as how to play, the best devices to play on and much more. 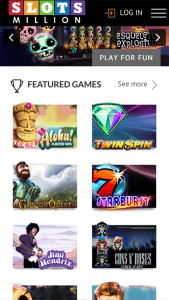 Just as it has become more convenient to play the pokies, it has also become easier to sign up to any old mobile casino, deposit, and spin the reels of the slots. This can all be fine, but as you will read on casino forums, many real players have done this and fallen prey to the handful of rogue mobile pokies sites that operate to scam vulnerable players.

The best way to avoid these sites is to play at the following mobile casinos. Our team have played here extensively, researched that they are accredited by third party testing organisations to ensure the games are fair, and have deposited, played with real money and have been paid our winnings without any problems.

How to play the pokies on a mobile device

To play the pokies on your smartphone or tablet, you can visit any of the mobile casinos we have recommended above. Simply sign up, make a real money deposit and then tap on one of the many titles available in the mobile games lobby. All you need to play is a solid Internet connection, but generally if you aren’t connected to WiFi you’ll be covered by a 3G or 4G connection, so you won’t have a problem playing on the go.

While mobile gameplay is very similar to desktop play, there are some features that have been replaced with a different symbol to make mobile play possible. We’ve included two of the most popular software developers and the features they use for their mobile pokies to give you an idea of the slight changes in mobile gameplay: 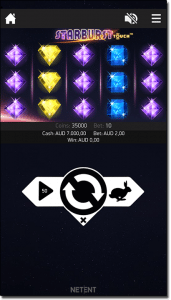 Play the pokies from the home screen of your device

The obvious way of playing portable pokies is in instant-play mode, by simply tapping one of our links which will load games using your usual mobile browser, whether Google Chrome, Firefox, Safari, or another mobile browser. From there, all you need to do is load some funds if you want to play for real money bets, then tap to select the game you want to play. There are no downloads required, and no fuss, however, for those who prefer the use of mobile apps over browser-play, there are some other options.

Given the ease and usability of instant-play mobile sites, along with some stipulations regarding casino app marketing, most online casinos steer away from offering a native app. Most Microgaming powered casinos, on the other hand, provide the option of downloading an official app, which is compatible with both iOs and Android. Our recommended Microgaming casino Royal Vegas Casino offers a native app available for Aussie players to download for instant access on the go. Both of these sites also offer an instant-play casino for those who prefer not to download an app.

How to make a web app 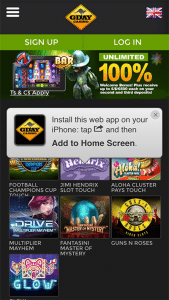 For those who prefer instant-play, but would like the ease of accessing a casino with the tap of a thumbnail, there is the option to create a web app from any browser-based casino. Web apps acts almost like a bookmark for your home screen, removing all the browser functions such as the URL toolbar, the back buttons, etc. So while, it runs via your mobile browser, it takes you straight to the casino from your home screen with the use of the little icon, just like if you had downloaded a native app.

Some mobile casinos have created a web app for you (like the one you can see here from G’day Casino) and will prompt you to download it from their mobile site, or you can easily make one yourself if this isn’t an automated option.

Simply head to the site of your choice via your mobile browser using our links, tap on your browser’s menu/settings bar, and then tap on the option reading ‘Add to Home Screen’. Here you will be able to name the icon that will sit on your mobile desktop and when you tap on it you’ll be taken straight to that casino. This web app function works for iPhones, iPads, Android smartphones and tables, Windows devices and more.

Just as land-based casinos are lined with a sea of pokies, and desktop casinos are littered with more pokies than you could possibly try in one day, mobile sites offer more pokies than any other mobile optimised casino game. The number of mobile-friendly games is limited compared to the full desktop offering, but as mobile gaming technology continues to advance there are now hundreds of portable pokies to choose from. Here are some good game options to start you out on your mobile gambling journey: 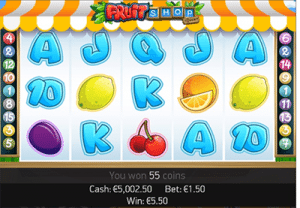 Players who enjoys the classics – try Fruit Shop: Net Entertainment have an array of pokies available for their Touch line, but for a classic mobile slot with a modern spin, Fruit Shop is a good option. Along with the classic fruit symbols such as the lemons and cherries, it offers five free spins that are regularly triggered over and over again, with a 2x multiplier attached on every free spin.

Players after the biggest win – try Mega Moolah: We know we harp on about Mega Moolah, but since so many have become millionaires (including many who triggered the multi-million dollar jackpots on their mobile devices) we can’t help but include it again. This progressive jackpot game from Microgaming gives players the chance to win a huge seven or eight figure jackpot. Featuring a Safari theme, all players need to do is play the max bet of $6.25 per spin and you could be pocketing the major prize pool on offer.

Players who enjoy themed pokies – try Game of Thrones: Microgaming have created two Game of Thrones pokies -one with 15 paylines and the other with 243 ways to win. They are quite similar in terms of the graphics which you will recognise if you watch the TV show, and the multi-level bonus rounds of each house from the books and show. With up to 18 free spins and varying multipliers available in the multi-level bonus, these two pokies are a must for GOT fans. 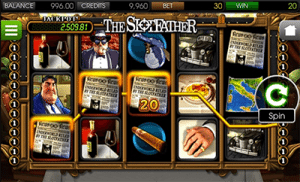 Players who want the best graphics – try The Slotfather: BetSoft has a line devoted to mobile pokies, known as their ToGo range. This line features many of the pokies from the BetSoft Slots3 line of 3D pokies, which are incredibly popular due to their 3D graphics and high level of detail. While the BetSoft brand has gone mobile, it hasn’t comprised the quality, with mobile games offering all the same animation and special features as the desktop range. One of our favourite games from the ToGo line is The Slotfather as it offers free spins, re-spins, multipliers and a local area network progressive jackpot.

Players who are after the most unique mobile slot – try Esqueleto Explosivo: Software developer, Thunderkick, is quite new to the game but with their emergence they have also brought an array of unique slots, including Esqueleto Explosivo. Based on the Mexican festival, The Day of the Dead, this slot offers exploding skulls in place of spinning reels. Additionally, there is a massive 32x multiplier available if you win consecutively.

Pros and cons of playing the pokies on a mobile device

Playing the pokies on a HTML5 or Flash mobile platform can be enjoyable but it can also have its drawbacks.

Some of the advantages include: 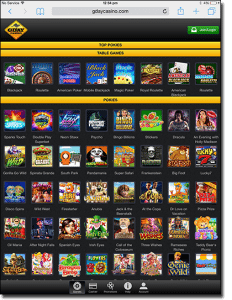 Some of the disadvantages however, include;

Best portable devices to play the pokies on

There are a number of modern mobile devices, but the best gadgets to play the pokies on include Apple devices, such as the iPhone and iPad, and leading Android devices like Samsung Galaxy, Sony, Nexus and LG smartphones and tablets.

Other devices that work well too include Windows Phones, such as HTC, Nokia, and Microsoft devices, and Blackberry smartphones and tablets. Thanks to the prevalence of instant-play casino games, it no longer matters what operating system your phone or tablet is operating on, as games can be accessed directly over your mobile web browser regardless on the mobile make or model.