Pachinko is all the rage in Japan, constituting as one of the countries favourite recreational pastimes, so why don’t we know much about it here in Australia? We love everything else that’s been passed to us from the Japanese – sushi, sake, Subaru’s – so it seems bizarre that this Japanese cultural phenomenon hasn’t hit our shores.

The disappointing reality is that no matter how intrigued we are by this game, the chances of pachinko ever making its way to the pokies floors of Australian, American or European countries is highly unlikely, and here’s our speculations as to why.

What exactly is pachinko? 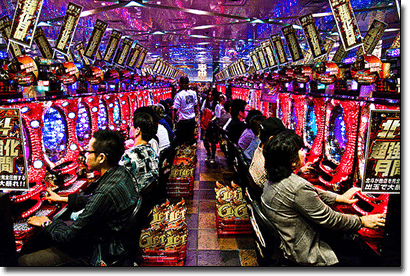 Pachinko is a hugely popular Japanese gaming machine that could be considered the Japanese version of the pokies, but instead of being played in a casino it’s played in gaudy pachinko parlours. Visually, it’s more similar to a pinball machine, but instead of inserting coins, players purchase little metal balls from the parlour which are then launched into the machine.

The balls shoot around past hundreds of pins, with the aim of the game being to land balls into high ranking positions amongst the pins. Unlike pinball, there are no flippers on the side of the machine to help guide the balls, so just like with slot machines, there is no skill required to play pachinko and winning relies completely on luck.

As gambling is illegal in Japan, pachinko provides a carefully constructed loophole around these gambling laws as this game isn’t technically played for real money. Instead of pachinko machines dishing out money like the pokies do, they spit out more balls as a token of your victory. When you’ve finished playing, you take all your winning balls to a parlour employee, who puts the balls through a counting machine to determine your winning amount, which is then given to you on a card. Your card can then be handed over at the parlours prize centre in exchange for various goods.

Prizes earned from pachinko can include such varied item as pens, sunglasses, cameras, beer, cigarettes, lighters, jewellery, books, soft drinks, stereos, and many other weird and wonderful things. The real gambling loophole comes from the fact that some parlours distribute “special prizes” like small gold nuggets which can then be exchanged for cash at “un-associated” venues that conveniently happen to be right next door to the pachinko parlours.

Sneaky, yes, but Japanese police happily turn the blind eye to this practice, which many believe to be a sign of the changing attitude towards gambling as the country leans towards the possibility of changing its gambling laws.

Why pachinko won’t work outside of Japan

In true Japanese style, pachinko machines are filled with all kinds of quirky animation, sounds and videos. Sound systems pump out the Rocky theme song on repeat, lights flash enough to induce an epileptic fit, and the stench of cigarettes clings strong in the air. Pachinko parlours are notorious for being incredibly loud and overwhelming for Western tourists, which is a fascinating cultural difference given that Japanese locals attend these parlours to unwind and enjoy some alone time.

Land based casinos in the West share some of these traits, but on a much more subdued level. Slot machines can be loud and flashy, but are like sleepy kittens in comparison to the exuberance of pachinko machines. Plus, unless you’re playing pokies at a dodgy suburban pub, there’s still an air of sophistication to be enjoyed while playing at a land based casino, and pachinko doesn’t share this trait.

In our opinion, pachinko is just so inherently Japanese that it just wouldn’t take off in other countries. In addition, the quirky aspects of pachinko are just way too appealing to a younger crowd, and the Australian government could never legally allow something with such juvenile appeal. To us, pachinko seems to be more aligned with playing video games in exchange for tokens at Time Zone than it does playing slots in a high end casino.

Land based casinos are big drawcards for Japanese tourists in Australia, so while you may think that pachinko should be offered here to appeal to that market, remember that in Japan the popularity of pachinko is due to the fact that there isn’t an alternative gambling option. When Japanese gamblers hit the casinos, they want to enjoy the slot machines and table games they don’t have access to at home.

If pachinko did ever make its way to Australia, it’s unlikely that it’d have its own parlours, and there’d more likely be a designated area of the casino or pokies lounge that offered a handful of pachinko machines. Games would be played for real money, which strips away the novelty of playing for random real prizes and detracts from its appeal, in our opinion.

Without all those quirky and awesome things that we love about Japanese culture, pachinko just wouldn’t be the same. It’s probably for the best that it remains in its home country so that if Westerners do get the chance to play, it will be in all its excessive glory.