If you are after branded pokies based on top films and television series, iSoftBet is the top leading provider responsible for the best cinematic titles. We detail where you can find their pokies and the most popular titles to get you started.

The leading software developer behind the best cinematic pokies isn’t as widely distributed across the best sites, which are detailed here on our homepage, but there are still a handful of sites you can find the catalogue at.

The best place to find iSoftbet pokies is at Slots Million. Offering over 1000 titles, you will find more than 40 iSoftBet titles here. There’s also a $100 welcome bonus for new players, plus 100 free spins – but these are to be used on Net Entertainment titles only<.

There are a large number of iSoftBet pokies available, and there are quite a few based on films which are incredibly popular. Pop culture pokies aren’t the only titles offered by the software provider; you can also find a number of original themes, while many of the pokies from their catalogue even feature a progressive jackpot attached.

We used Slots Million’s convenient search filter – using the ‘Software Developer’ and the ‘Most Popular’ options – to determine the most commonly pokies played from the iSoftBet catalogue. 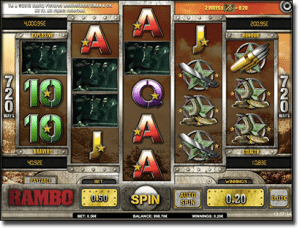 Rambo: Based on the cult character from the film series starring Sylvester Stallone (with his image used on the reels), Rambo takes us to the frontline of the Vietnam War. The pokie has scrapped the paylines and offers 720 ways to win, as well as four progressive jackpots and an array of free spins. The progressive jackpots are quite small with the largest of the lot only getting to around four digits, but it is still a nice addition.

Platoon: Based on the 1986 war film starring Charlie Sheen (when he was in his prime), this pokie offer 30 paylines across 5 reels. The graphics include all the popular stars from the film, which are crystal clear thanks to the HD graphics. The bonus features include 12 free spins with up to a 15x multiplier and a Roaming Wild feature, where a winning combination made with a Wild will grant a free Re-Spin and a 3x multiplier. 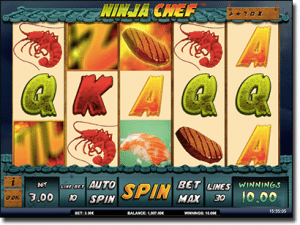 Ninja Chef: This pokie offers players an original theme, based on a Japanese kitchen with a delicious cuisine of sushi, fish, lobster, and more, cooked up by the ninja chef himself. While it isn’t based on a TV show, it does feel this way thanks to the animated graphics and the features aren’t shabby either with up to 15 free spins and up to a 6x multiplier available. 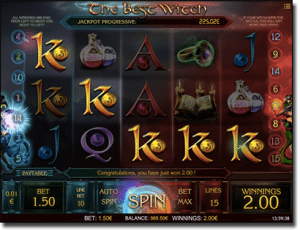 The Best Witch: Another original theme by iSoftBet is available on this 5 reel and 15 payline pokie. Based on a battle of two witches, the HD graphics are stunning while the features are quite unique. There is a Pick your Witch bonus round, where you pick a witch in a battle and you will earn up to 20 free spins if you lose, or up to 30 free spins with Sticky Wilds if you win. There’s also another bonus round where you match up symbols and win and a progressive jackpot to win – making this quite an entertaining pokie.

The graphics are stunning, the features are exciting, and each game is incredibly user-friendly with easy to understand paytables.

What’s more you can play these titles on not only your laptop or desktop, but on your smartphone or tablet on the go. The graphics are optimised for the mobile platform meaning you won’t be compromising the quality just because you’ve decreased the screen size.

Click or tap our links for more iSoftBet pokies at our recommended sites listed above.

Established in 2010, iSoftBet haven’t been around as long as some of the other top leading online pokies games developers, but they’ve still managed to make quite a name for themselves thanks to their extensive cinematic catalogue.

Operating out of both their London and Luxembourg offices, they have grown to offer over 400 games, which includes 150 casino style games and pokies, as well a games for Facebook and even lottery titles.

While they have teamed up with major movie studios to develop their pokies, their table games are more traditional with a mimicked land-based experience run on Random Number Generator (RNG) software.

While we recommend secure online casinos, each with their own licenses, top software developers are too licensed, including iSoftBet. The providers are accredited by the Alderney Gambling Control Commission, the UK Gambling Commission, and the Lotteries and Gaming Authority in Belgium confirming the games have been tested and have been deemed as random and fair.

What’s more, every pokie, and casino game offered by iSoftBet, is tested regularly by one of the top testing companies known as iTechLabs. These credentials are further proof iSoftBet offers fair payouts on each pokie from their cinematic catalogue.