Rabcat pokies are some of the most innovative and graphically appealing pokies available in the iGaming industry – so much so even top leading developer Microgaming teamed up to offer the pokies on their Quickfire platform. We take a look at the features of Rabcat pokies to explain just why Microgaming struck up a deal with the software developer, and where you can find their small but impressive catalogue.

Rabcat emerged in 2001, and have created a small but substantial catalogue of pokies. They also offer video poker titles, but these haven’t taken off as much as their pokies have.

This is perhaps due to the attention to detail they offer in every single title, but also thanks to Microgaming partnering with the software developer to roll out the pokies on their platform.

It took over a decade for Rabcat to establish themselves, but once Microgaming took notice in 2012 they’ve catapulted into the spotlight. Microgaming signed with Rabcat and rolled out the 3D slots on their Quickfire platform, with the first release, Castle Builder, made available in 2014.

From here, Microgaming began distributing Rabcat’s pokies catalogue, which we detail below, at their corresponding online casinos and even on the HTML5 platform – for smartphone and tablet players.

While the partnership can seem quite unusual since Microgaming have some of the best pokies in the industry – the top leading software provider actually lacks any quality 3D slots (Sterling Silver their first 3D pokie required 3D glasses and was a flop).

Therefore, integrating the catalogue of 3D pokies on their platform was a smart move for Microgaming and a beneficial one for us.

Rabcat pokies see 3D technology used to immerse the player into the game, while playing for real money.

Each title has its own unique theme with graphics executed perfectly to detail the story, while the animations light up on a win to make it even more exciting.

Available pokies from Rabcat at our recommended Microgaming casinos, which we detail below, include: 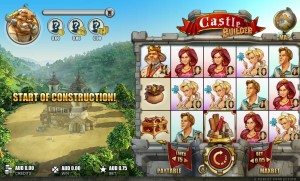 Castle Builder – Featuring 15 paylines across 5 reels, Castle Builder is based on four kingdoms with castles which need to be built. Players need to collect building symbols to win and as they progress and fill the building progress indicator players will trigger a Pick-Me bonus to potentially win big.

Penguin Splash– This adorably themed pokie features 5 reels and 25 paylines and a new way to score free spins – collecting Scatters with the more you earn the more free spins you receive. The Gamble feature is also available here for players to have the chance to double their winnings. 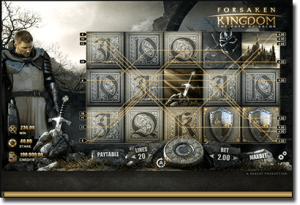 Forsaken Kingdom – Yet another medieval theme (similar to Castle Builder) for this 5 reel and 20 paylines pokie. We follow King Arthur and the Knights of the Round Table and can trigger up to 12 free spins as well as a multiplier of up to 20x. There is also three additional Bonus rounds for huge wins.

River of Riches – Based on an Ancient Egyptian tale of a mysterious underground river, this 5 reel and 25 payline pokie offers players 10 free spins with up to four Fixed Wilds. The animations are crisp and tie in well with this interesting theme. 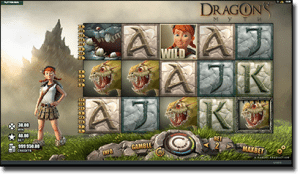 Dragon’s Myth – Featuring 20 paylines across 5 reels, Dragons Myth is based on a heroine facing off against four dragons. There are up to 20 free spins available, a Dragon bonus round for big wins, and the addition of Microgaming’s popular Gamble feature.

Scary Friends – Despite this theme being original, we can’t help but think of Monsters Inc, when playing this 5 reel and 25 payline pokie. There are five to 14 free spins available to win, as well as a special Bonus feature where you pick a monster out of the four to race – winning a substantial amount if you do win (up to 25,000 coins).

The Legend of Olympus – While a theme based on mythological gods isn’t too unique, this pokie, based on Zeus and Hades, offers incredible graphics to keep it interesting. Featuring 5 reels and 20 paylines, players can land up to 14 free spins, as well as a chance to win big in a Pick Me bonus involving treasure chests.

Where to play Rabcat pokies

Rabcat pokies are available to play via your web browser, Safari, Chrome, Firefox etc., at the following verified online casinos: