Unless you’ve been living under a rock, you would have heard about virtual reality and the sudden rise in the fascinating technology. Pretty much every major technology company is invested in “VR” in some form, with Facebook having taken perhaps the biggest plunge into the pool with its $3 billion purchase of the company behind the Oculus Rift headset. There’s absolutely no doubt that VR is here to stay, and it’s not a matter of if online casinos will get behind the technology, but rather when.

Slots Million is perhaps the most active online casino on the scene, experimenting with a number of different VR pokies and inviting members to visit their virtual gaming floor in VR. While the likes of gaming, film and television, live sport, and other forms of “entertainment” (wink wink) are dominating the world of virtual reality, VR pokies are quickly growing in popularity, as well as improving in quality.

VR pokies – Do they exist?

While most other mediums have been quick to embrace VR, the online casino space is being a little more cautious, and rightly so. No one wants to spend their precious spare time navigating through a poorly constructed virtual casino: it has to be absolutely perfect to justify the investment. 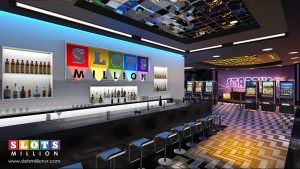 Slots Million Casino is certainly at the top of its game in this regard, offering a wide selection of VR pokies that bring the online gambling experience into the first-person perspective.

You might be wondering what makes VR pokies so special, and the answer is simple: it allows you to step away from your computer screen and into a Las Vegas-inspired casino filled with glitzy pokie machines. It feeds into your senses in a way that playing the traditional way just can’t offer, because you’re actually mimicking walking down an aisle lined with the best online pokies the web can offer.

While VR pokies certainly exist, there’s still a long way for the technology to go. The whole point of VR is to offer the user a more engaging, real and engrossing experience, and it certainly does that in most cases. Despite VR pokies mostly being in the experimental phase, they still play and can be controlled in exactly the same way as you would play them on your desktop or mobile, but of course with the added sense of realism.

Oculus Rift: Safe to say that VR wouldn’t be where it is today without the trailblazing Oculus Rift. Undoubtedly the best and certainly the most popular VR headset on the market, Oculus Rift has the best VR software available for it, hands down. No other VR headset even comes close. On top of that, it’s the only VR headset compatible with Slots Million’s virtual reality pokies lounge, making it a superb investment if you’re looking to get involved.

HTC Vive: The HTC Vive is quite far removed from Oculus Rift, although it offers exciting possibilities for VR pokies. It allows the user to walk freely while wearing the headset, connecting them to a virtual world built around their surroundings. It’s a fantastic VR headset, and would be ideal for walking around a virtual casino, but the only problem is the price: it’s the most expensive headset on the market by far.

PlayStation VR: The PlayStation VR headset is the cheapest VR headset on the market, but for a reason. While its 5.7” OLED screen and 360-degree vision allows it to render games and footage at 120 frames per second, it only players approved PlayStation software, meaning the likes of the Slots Million pokies lounge and Windows-based VR software is off limits. That’s a shame, because it’s a fantastic way to introduce yourself and your friends to VR.
Samsung Gear VR: Unfortunately, while the Samsung Gear VR unit plays software from the Oculus Store, it isn’t currently compatible with VR pokies. It’s one of the more affordable and reliable headsets on the market, and is incredibly accessible due to it not requiring an expensive PC to use. Virtual reality pokies may came to headset in the future, though, so keep an eye out for them. 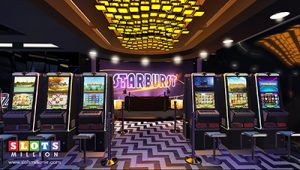 Slots Million kicked off the VR casino revolution with its own virtual reality pokies lounge back in October 2015. They were certainly one of the first companies in the world, not just in the online casino space, to embrace VR, so safe to say they know exactly what they’re doing when it comes to virtual reality. Many of the thousands of slots available on Slots Million have at least 3D mode, which simply allows you to see the pokie machine as if it were slotted down right in front of you.

The games with VR support work exclusively with the Oculus Rift headset, mainly due to the accessibility the headset offers for developers. With VR casinos still very much a work in process, it’s unsurprising that the first and most reliable VR headset on the market is used for this.

If you’ve taken the plunge and bought an Oculus Rift headset, do yourself a favour and head on over to Slots Million to test out their virtual pokies lounge: you won’t regret it! Aside from having the best at-home casino experience of your life, you’ll also land a $100 welcome bonus alongside 100 free spins. Check out a full 360 degree view of their VR casino in the video below – you couldn’t ask for a better introduction to VR pokies.

Here are some of the games you can play while visiting the virtual pokies lounge at Slots Million online and mobile casino:

Check out our official casino review of SlotsMillion.com for more information on their dedicated (and growing) selection of virtual-reality enabled pokies games.