Playtech is behind some of the most distinctive pokies in the online casino industry. While they have faced obstacles in accessing players in some parts of the world, they are still considered to be one of the biggest pokies game developers on the Internet today. We take a look at the software provider, their impact in the iGaming industry, and where you can find their unique catalogue of pokies.

Established in 1999, Playtech emerged as a small company in the Isle of Man but have grown extensively – employing over 3000 people in The UK, Bulgaria, Cyprus, Estonia, Germany, Gibraltar, Israel, Latvia, Philippines, Sweden, and Ukraine.

Their catalogue has grown extensively with over 80 pokies available featuring original themes, as well as many based on popular TV series and films.

Despite having many headquarters and employees around the world, Playtech have face some legal obstacles when it comes to accessing US and Aussie players.

The Unlawful Internet Gaming Enforcement Act was introduced in the US in 2006 and it had multiple repercussions for Playtech – mainly it was too difficult to still provide to this region. Therefore, US players can no longer access Playtech games, including their pokies.

Aussie players also have had a hard time in the past, but fortunately most can now access the titles at safe online casinos, such as www.SlotsMillion.com – our recommended online casino for Playtech slots.

When you see a pokie online based on your favourite film or TV series, you can bet it will most likely have been created by Playtech. Their catalogue is full of popular culture themed slots, but there are also original themes too. Regardless, each has been designed with crisp graphics and audio which ties in perfectly. 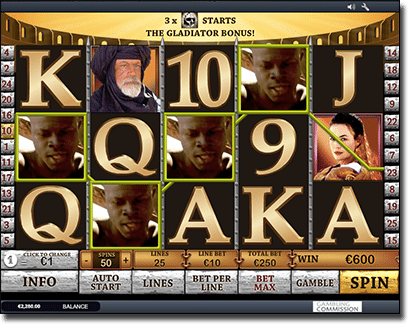 One of our favourite Playtech slots, available at Slots Million, is Full Moon Fortune, a 5 reel and 20 payline slot. 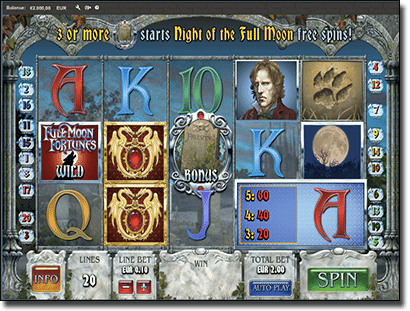 We follow the mythical tale of a man transforming into a wolf when the full moon comes out, while the detailed video intro will really get you into the storyline. But what we are really here for is the features.

There are 20 free spins up for grabs, but the exciting part is there is up to a 25x multiplier available. Simply spin at least three Scatter symbols to earn a free spin and where you will also be given the chance to pick a grave stone and enter another bonus round – where you can win 20 free spins and a multiplier of 25x.

What’s more, when a full moon symbol appears on reel 5, every single Dr Blackwood symbol changes into a Wild symbol and a 5x multiplier is applied.

Full Moon Fortunes is also a high variance slot, meaning while you won’t see regular payouts, when there is one you will be paid out handsomely.

Where to play Playtech pokies?

As mentioned above, you can find Playtech pokies at Slots Million online casino – one of the most unique and visually appealing online casinos available. You can search specifically for games from this provider by using the sites comprehensive search tool.