There are thousands of pokies available online thanks to the variety of software providers out there. Some are good, and some are not so good – but one that falls in the first category is Play’n Go. This premium pokies game developer is well known for its impressive online pokies games – with a wide variety of mobile optimised slots. Games can also be played on any desktop or laptop device. We take a look at the pokies Play’n Go has to offer, and the best slots sites offering these games.

Play’n Go is a Swedish casino game software developer that started up in the mid-1990s with a small team of ‘tech heads’ but has grown to employ over 50 employees. Each member has a passion for the latest technology, making the pokies created by Play’n Go incredibly innovative and unique, all the while still mirroring our favourite classics.

The software developer is governed by the Malta Gaming Authority, the Alderney Gambling Control Commission, and the UK Gambling Commission, which means some of the best gambling jurisdictions in the world can verify Play’n Go games (including their long list of pokies) as fair and confirm they are not manipulated in the operator’s favour.This just adds to their reputation – Play’n Go are indeed top leading software developers in the iGaming industry. 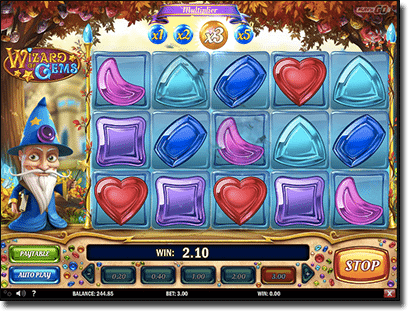 While the software developer is fair and reputable – thanks to the governing bodies as mentioned above – you still need to make sure you play at secure online casinos. This is because reputable sites are encrypted meaning no one will steal your personal or financial information.

You will find some of the major software developers, such as Microgaming and Net Entertainment, have hundreds and hundreds of pokies. Play’n Go are getting there in terms of numbers, adding new additions regularly, but at the time of writing have over 40 slot machines.

However what they lack in numbers they make up for in exciting and innovative themes and features with their catalogue offering the following titles: 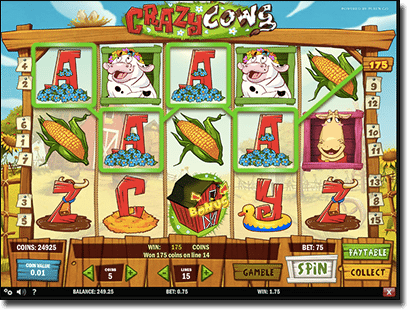 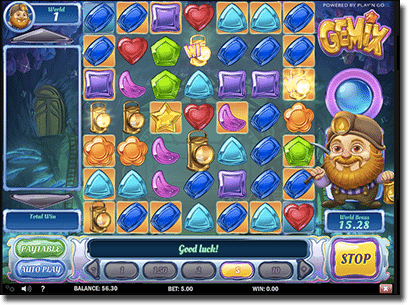 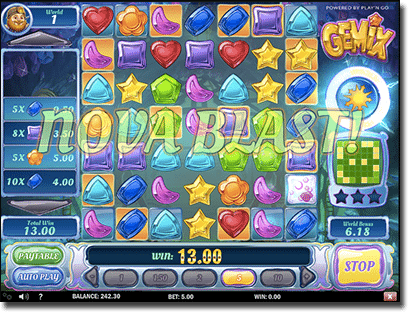 Gemix has to be one of our favourite Play’n Go slots predominantly due to the fact it doesn’t even feel like you are playing a standard video slot. This is due to the format and the features included, such as the three different worlds – Miner’s World, Wizard’s World, and Princess’s World – which are triggered when their corresponding Wilds appear on the reels.

There are also Cascading Reels which sees five symbols explode when they match and new symbols fall in their place to give you another chance at a win.

But the main bonus feature is what will really transform your pokies gaming experience as it feels like you’re playing a video game, but for real money.

The Crystal Charge Metre Bonus sees a metre on the side of the reels fill up as you win and the following will then occur once it is full:

While we mentioned Play’n Go’s catalogue isn’t as big as other major software developers, it actually is one of the biggest when it comes to mobile catalogues.The games have been optimised for both portrait and landscape modes and all devices, including Windows Phone and Blackberry smartphones and tablets, not just Android and Apple. You can follow our links via your mobile browser – Safari, Chrome, Firefox, etc, – and play all the titles listed above on your portable device.

Customer service is incredibly important when it comes to gaming online as we are playing with real money with the main aim to win – so when the games aren’t working or we have another issue, we want to resolve it quickly.

Our recommended Play’n Go casinos offer round the clock customer service via a number of communication channels, such as phone, email and live chat. This means you can get help right away and enjoy a smooth Play’n Go gaming experience.