Looking for the hottest name in up and coming game developers? Look no further than Thunderkick, a young gaming crew operating out of Sweden. This boutique software company is out to change the online gaming industry by enhancing the user experience when playing at a Web casino, a mission that shines bright in their small yet thoroughly impressive portfolio of games.

If you’re on the hunt for an online pokies game which offers features unlike those you’ll find in a land based pokie machine, with a fresh new perspective, welcome to the wonderful world of Thunderkick.

Where can I play Thunderkick pokies?

The Thunderkick brand is only just starting to take off, but in the short amount of time these guys have been in operation their games have been featured on some of the world’s leading Internet casinos, testament to the strong talent behind these games. You’ll find a handful of Thunderkick pokies at these reputable real money sites:

You can demo Thunderkick games at these casinos for free before deciding if you want to move on to play with real money, with plenty of secure deposit options available when choosing to fund your account. Players can load funds in a range of currencies including AUD, USD, NZD, EUR, GBP and CAD to name a few, selecting from such safe payment methods as Visa, MasterCard, Skrill, Neteller, POLi and Paysafecard.

Don’t expect the elaborate game collection you’ll find from big names like Microgaming, NetEnt or BetSoft, but once you see the quality and level of detail which has gone into these quirky and vibrant games the lack of variety won’t be an issue. Thunderkick has just over 10 titles available, with some of our favourites being:

Esqueleto Explosivo – Esqueleto Explosivo is a beautifully detailed pokies game following mariachi band Enrico Mortis and The Boners as they celebrate the revered Mexican holiday the Day of the Dead. The band is made up suave sugar skulls in traditional face paint, singing their way towards winning spins. Each time a skull breaks into song it explodes like fireworks to make way for new skulls and potentially further wins. This game must be played with your speakers on or headphones in to enjoy the humorous side and revel in the celebratory tunes.

Toki Time – if you’re a fan of quirky animation series like Adventure Time or a lover of Japanese kawaii animation, you’ll love Thunderkick’s wonderful world of the Toki’s, an ensemble of cute and bizarre creatures who pop up from holes in the earth to bestow happiness and magic across the land. On top of using excellent design and upmost creativity, Toki Time also offers such bonus features as expanding wilds, re-spins and two-way wins. 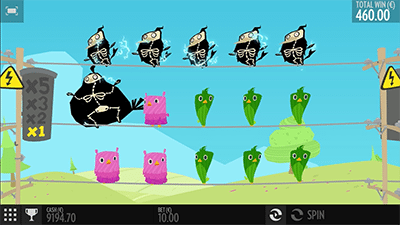 Birds on a Wire – in Birds on a Wire adorable unsuspecting birds go about their business before learning the hard way the telephone wires they are perching on are attached to a high voltage generator gone wild. Watch as new flocks of bird’s land on the wires to see if they’ll get a good hard dose of electricity, zapping through to their bones to bring you the big bucks. You’ll see which birds get a zap before flying away in a blur of feathers to make way for new birds. Completely unique and highly inventive, Thunderkick get big points for creativity with this one.

1429 Uncharted Seas – this exquisitely designed pokies game looks more like the delicately framed pictures you’d find in a hipster coffee shop than an online casino game and it’s hard to think of any other virtual pokies game which has the same kind of finesse as 1429 Uncharted Seas. It looks like a vintage treasure map, complete with mythical nautical beasts and an invigorating soundtrack embodying the feeling of sailing the seven seas. Most importantly, 1429 Uncharted Seas comes with a special expanding wilds feature which has the power to bring some monumental wins your way.

The members of the small team behind Thunderkick games have years of experience in gaming and gaming development, with a love for the industry which is evident through the careful attention to detail in all Thunderkick pokies. All games are designed, developed and created in-house by the dedicated Thunderkick team. The brand first launched in 2012, making them relatively new on the online casino scene, but with a fast growing reputation.

In their own words the company is “driven by a passion in developing amusing games and striving to let quality come before quantity.” Thunderkick is licensed by the Malta Gaming Authority, one of the world’s most highly respected jurisdictions for online gambling.