The era of digital gaming means tedious mechanical pokies have turned into bright, entertaining video game style titles. One provider which we have to thank for this, is Internet pokies developer Quickspin. Its dedicated focus to these types of casino games results in original and fascinating real money games which caught the attention of Playtech.

Pokies are available at all online casinos, but a select few offer Quickspin’s titles while also being secure. These sites all offer a search filter for specific providers, so you can locate all the Quickspin pokies available at the online casino in question. Quickspin has a small but stunning catalogue of titles which can be found at the following sites:

Quickspin is based in Sweden and is a gaming studio focused on creating the best video pokies in terms of quality and entertainment. The company has been around since 2011, and has made a prominent mark on the industry due to the team – we detail more information on this below. There aren’t as many titles as say Net Entertainment or Microgaming, but there also isn’t any duplicates – each pokie is unique and original.

The Quickspin pokies available include:

From the list above, which is the entire Quickspin catalogue, we have three favourites we keep coming back to. 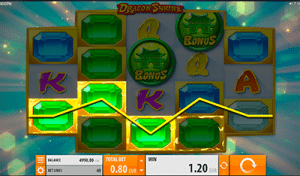 Dragon Shrine: Dragon Shrine is the perfect title for players after a large number of bet lines. There’s 40 paylines across 5 reels but what’s different is reel 1 and 5 have 3 rows, while the middle three reels have four rows, changing up the format a bit. There’s a Dragon Double Stack feature where players get a free Re-Spin when these dragon symbols appear Stacked. This feature is also activated in the Free Spins bonus for huge payouts. The minimum bet for Dragon Shrine is $0.20 and the maximum bet is $80 per spin.

Phoenix Sun: This game is incredibly unique as it starts off with 3 rows and the innovative 243 ways to win format in play and shifts to 6 rows with up to 7776 ways to win. No other provider offers the latter, and when you open the pokie it doesn’t even really look like one. Which is why we love Quickspin so much – the provider has changed the way we gamble. The title is set in Ancient Egypt with sculptures we would expect to find surrounding the pyramids. There’s Re-spins, Free Spins and big payouts too, with a minimum bet of $0.25 and a maximum bet of $100. 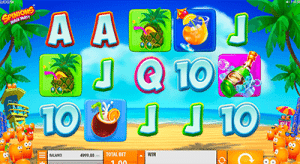 Spinions Beach Party: If you love the Minions film, this pokie will see you drawing some comparisons. It features a classic – compared the two previous titles – layout with 5 reels and 25 paylines. The audio is incredibly bright and fun – perfect for a party – while there’s Sticky Wilds which give you a free Re-Spin every time they appear. This feature sticks around for the base game and the Free Spins feature, with a minimum bet of $0.05 and a maximum bet of $100 per spin available.

Not all Quickspin pokies have been released on the mobile platform, but a large majority have, including Phoenix Sun and the other two favoured titles detailed above. You can find these pokies at the mobile versions of the sites listed on this page by following our links via your mobile browser.

Quickspin has also optimised these titles to suit mobile devices – both smartphones and tablets by Apple, Android and Windows – but you may have to enable landscape mode to play. When it loads, the full pokie will fit to your device’s screen and it will look the same as the desktop version for the best possible pokies experience.

Quickspin are constantly monitoring the pokies market to provide players with what they really want from a gambling experience – fun paired with profits. While the latter relies on luck, Quickspin ensure people are entertained when they play their unique games.

This has all been made possible thanks to the team behind Quickspin, which includes the CEO, Daniel Lindberg, who has five years of experience as the Sales Director at Net Entertainment and The Vice President of Products, Mats Westerlund, who worked at Net Ent too. Both have used their insider knowledge to create an incredible company.

In 2016, Playtech acquired Quickspin for €50 million ($AUD70,864,816) but the pair, along with Quickspin’s CPO, Joachim Timmermans, will stay on board for the following three years. This will see Quickspin’s portfolio added to the Playtech catalogue and may result in any new titles being released under the Playtech name.