Regarded as the most popular pokies game in the online betting world, Starburst is a fun, vibrant title which combines a retro atmosphere with cosmic music, bright neon graphics and a space-themed background. 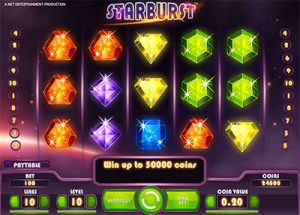 The Starburst online pokies machine brings the 1980s back to life, with old school simplicity and gameplay mixed with the latest top-notch graphics and features, allowing players to experience the thrill of winning big right in the comfort of their own home.

There is also a betting style to suit any player, with coin sizes ranging from 0.01 to 1.00, with the minimum wager being just 1c and the maximum being a sizeable $100 – making it a great choice for humble bettors and high-stakes slot players alike.

Starburst is a simple game to play in comparison to many other online slots games. The board itself is of a five-reel variety with ten paylines, offering a non-progressive maximum jackpot of $2,500. The highlight of the game is the Starburst Wild feature which heightens your chances of winning big.

Although it can only appear on the middle three reels, the Wild will expand to take up the entire reel. When this happens not only does the Wild substitute for all other symbols, it also grants a re-spin each time it appears.

Compared to many online pokies which offer interactive mini-games or bonus rounds, Starburst is relatively simple, making it unique amongst the Net Entertainment collection.

Expanding Wilds: While it is fairly standard in its setup and stacked symbols, the game comes to life whenever the Starburst symbol is hit on one or more of reels two through to four. 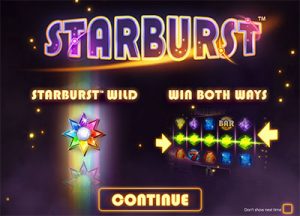 When this multi-coloured star hits it can substitute for any other symbol to complete a winning combination.

Additionally, whenever you land on the Wild feature, the symbol expands to fill all three spots on the reel, giving you the opportunity to win big.

Re-spins: When you land a win with the expanding wild symbol, the reel remains in its place while the remaining four reels’ spin again. In essence this is Starburst’s equivalent of free spins, giving you up to three on the trot whenever you hit a wild reel.

Pays both ways: Not only does Starburst pay left to right, meaning the combination must start on the leftmost reel to collect a win, but it also pays right to left, effectively doubling your chances of winning.

There are seven base symbols in the Starburst game aside from the Wild symbol, with five different coloured gems, a seven and the bar symbol filling the space on the board.

The purple and blue gems are the lowest paying symbol, awarding you 25 coins if you can spin five of a kind across the reels. The next best is the orange gem which pays 40 coins for five symbols, the green gem which results in a 50 coin payout for five symbols and finally the yellow gem for which you will receive 60 coins if you can spin five across the board.

The seven symbol is the second most lucrative symbol, awarding players 120 coins for five of a kind, while the Bar symbol is the one everybody should be striving to hit, giving you 250 coins for lining up five across each reel.

Starburst on your mobile phone or tablet 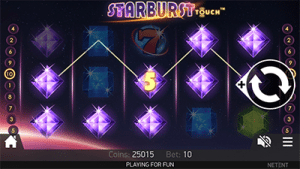 With intense graphics, Starburst is an excellent choice for mobile players having been specifically optimized with smartphones and tablet apps in mind as a part of Net Entertainment’s mobile touch line of apps. The mobile version also offers the same return to player rate of 96.1 per cent, making it one of the most popular games slots aficionados look for when playing at an online casino.

Where can I play Starburst?

Starburst can be enjoyed at a wide selection of online casinos, however we have hand-picked our top-rated sites which offer a safe and secure playing environment teamed with lucrative sign-up bonuses.

Our best rated casinos at which to play Starburst are as follows:

Overall verdict – is Starburst the game for you?

While it lacks over the top features and interactive mini-games which tend to be the norm for many online pokies titles these days, Starburst is still an exciting game which offers plenty of winning potential for players looking to get back to the basics.

It is basic, yet mesmerising, with the sparkly graphics and intense soundtrack creating a terrific atmosphere which can compare to playing in any brick and mortar casino around the world.

Overall, we think it is definitely a game to try out at any of our recommended online casinos, with the two-way pays feature teamed with its re-spins feature and diverse betting limits making it a standout choice for recreational players, big time gamblers and everyone in between.