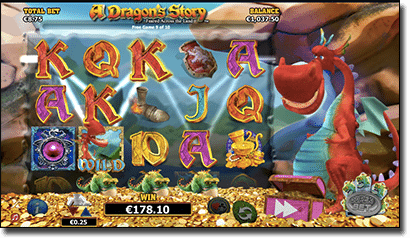 With just 10 episodes of Game of Thrones a year, it can be hard to get our dragon fix. Luckily, many pokies providers have chosen to base their themes on mythological creatures, including NextGen with A Dragon’s Story pokies.

However, NextGen have steered away from dark fantasy and chosen to create a bright, loud, and colourful poker machine which at times can be quite comical.

The cartoon-like graphics may make this feel somewhat childish, but they are quite stunning, and the addition of the SuperBet function raises the house edge in the player’s favour.

Theme and layout of A Dragon’s Story

We follow the adventures of Ruff the dragon who is apparently ‘Feared Across the Land’ and is trying to protect his treasure from the Brave Sir William – though it is questionable how he obtained it in the first place.

The graphics have been animated to appear cartoon-like and when paired with the storyline it can feel a little childlike – however they have been crafted well and live up to the high quality NextGen is known for.

There are 25 paylines across the standard 5 reels and NextGen have incorporated the spin button into a treasure chest with a play button. Other functions along the bottom include the Gamble feature (double or quadruple your winnings by choosing the colour or suit), the SuperBet feature (see below), AutoPlay, the bet size function, and the paytable.

You can find all the payouts you need to know via the paytable; we have explained most of them below.

The soundtrack is incredibly loud on each spin but as the reels stop it dies down to a more medieval track. You can mute this via the music symbol icon in the bottom left hand corner though. 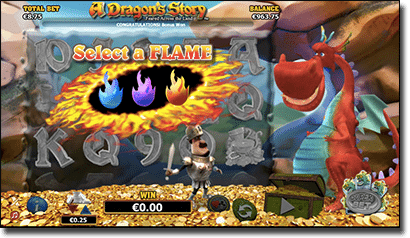 We can’t help but feel a little let down when a software provider chooses to opt for the traditional A-9 symbols to represent the lower paying symbols, but NextGen have crafted them so they appear stone-like to tie in with the theme.

The A and K symbols, and even the Q and J symbols, can be considered as the middle paying symbols however, with a maximum of 200 and 150 coins paid out, respectively, if you spin five of a kind.

Other middle value symbols include the shield and the boot on fire with a maximum payout of 250 coins if you spin five of either.

The top paying symbols include Brave Sir William running away, with up to 500 coins available to be won by spinning five (you can also get a payout if you spin just two symbols, but this is set at two coins only). The highest of all the standard symbols is the treasure symbol with five scoring you 1000 coins when you spin the maximum amount of five.

There are also two other symbols you should keep an eye out for, including the Wild and Scatter symbols.

The Wild symbol is Ruff the dragon with the text ‘Wild’ and pays a huge 2000 coins if you spin five. You will also receive a payout of 10 coins if you only manage to spin two Wilds.

The Wild substitutes for all symbols except the Scatter and its function is enhanced when the SuperBet feature is activated (see below).

The Scatter symbol is the pink jewel and spinning five will land you the highest payout of 2500 coins. Even spinning just two will land you a payout of 25 coins, though you won’t activate the Free Spins feature as this requires at least three Scatters.

You can view all the payouts by clicking the ‘i’ icon along the bottom of the game screen too.

There are quite a few bonus features in A Dragon’s Story but we will commence with the SuperBet feature since we keep mentioning it.

The SuperBet feature is an additional bet option where you can increase your stake in order to improve gameplay and the RTP, as follows:

The Little Dragons burn extra Wilds into the reels, which will in turn increase your chances of a big payout – up to 2000 coins.

Next up is the Brave Sir William Bonus where, randomly after any winning spin, Brave Sir William enters Ruff’s lair and here you must select a coloured fireball for Ruff to blow on him for your chance to win big – a minimum of 50 and a maximum of 1250 times your bet. You can sometimes pick more than one fireball too.

Finally, there’s the Free Spins feature activated by at least three Scatter symbols. Here you will be awarded with 10 free spins and Little Dragons will burn Wilds even more so here – irrespective if you are playing with the SuperBet feature switched on. Additionally, all wins are doubled and the free games can be re-triggered during the Free Spins feature.

Our verdict on the A Dragon’s Story pokie

A Dragon’s Story is a very unique pokie. While we were put off at first with the cartoon-like graphics and storyline, the features make this title worth our wagers and the animations are quite comical.

The Little Dragons across the bottom of the reels are a unique way to earn more Wilds and we recommend if you are going to play more than the minimum bet to activate the SuperBet 1 or SuperBet 2 features as the more Wilds, the better the payouts.

When the Brave Sir William Bonus is activated, and you pick the coloured flame, it is quite funny to watch the character run around on fire – but more exciting to see the big payout on offer – we won $312.50 here with a bet size of $8.75 (SuperBet 2 was activated).

It was a bit harder to activate the Free Spins feature, but even when we were let down by just spinning two, we earned a payout which softens the blow.

Overall, A Dragon’s Story is a great title from NextGen and if you want to try the Superbet feature yourself, or simply just want to spin the reels with real money, head to SlotsMillion.com and enter the title into the handy search bar.
Share On Facebook Share On Twitter