Microgaming’s popular progressive jackpot slot, Major Millions, is a wild game with huge payouts across five reels and 15 paylines. Featuring a Wild that doubles as a multiplier – meaning big wins – and and a scatter symbol, Major Millions is one of those slots that always seems to be offering something to the player.

What Major Millions lacks in free spins it makes up for in its huge progressive jackpot, which is actually combined with an alternative three-reel version of the game.

How to play Major Millions 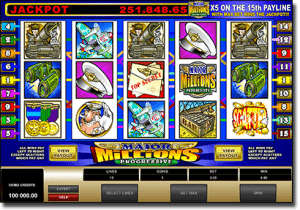 Major Millions’ scatter symbol can appear on any of the five reels, with any combination of three helping form a winning line. The Wild symbol is the Major Millions icon and offers jackpots of between 8000 coins and $400,000, depending on what payline the Wilds sit on. Coin sizes are 0.20, with a minimum bet of $0.10 and maximum bet of $3.00, suiting low-stakes players.

One of the minor downsides to the game is a lack of free spins or bonus rounds, which is disappointing considering many other popular modern progressive jackpot pokies games have these features. Still, Major Millions is worth a play for its substantial prize pool alone.

Major Millions’ simple design helps keep the focus firmly on the progressive jackpot across both the five-reel and three-reel games. The Major Millions Wild stands out amongst the crowd, while the Scatter symbol is in a league of its own with its explosive design. There are no free games so the style stays the same throughout, but when you’re playing for a jackpot in the millions, it’s hard to fault the game for that.

Played across 5 reels and 15 paylines, Major Millions offers a number of different ways to win. While there are no free spins or bonus rounds, Major Millions’ progressive jackpot should do enough to keep you playing as the jackpot ticks over. There’s only one coin size in 0.20, with a maximum bet of 300.

There’s a “Bet Max” option that can easily set the maximum bet for you, which you’ll need to be playing in order to be eligible for the jackpot: smaller bets won’t work for you if you’re looking to snag a chunk of the pie.

You can play for fun and test your luck in Major Millions progressive jackpot at a number of our recommended Microgaming casino sites, including www.SlotsMillion.com, which offers a $100 welcome bonus.

The most appealing aspect of Major Millions is its huge progressive jackpot. There’s also a smaller jackpot of 8000 coins up for grabs. 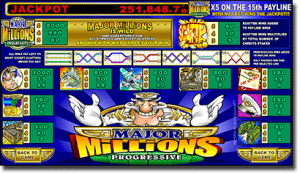 Scatter symbol: The explosive Scatter symbol can appear on any of the five reels, and will form a winning combination when at least three symbols appear across all reels.

It gets better: Getting five Major Millions symbols will reward you with huge cash prizes. Five symbols on any enabled payline from payline #1 to payline #14 will be worth 8000 coins for the mini jackpot. Five symbols on the 15th payline, however, lands the progressive jackpot. The progressive jackpot seems to average out at around the $400,000-$500,000 range, but could move well beyond $1 million.

Where to play Major Millions

You can play Major Millions at many of our recommended sites, which all host Microgaming online pokies software. All are verified by industry watchdogs like eCOGRA, are safe and regulated for player deposits, and have hundreds more pokies on offer from Microgaming and other game developers.

Major Millions could potentially make your dreams come true. That’s the major appeal of this slot. Its progressive jackpot ticks off, sometimes into the millions of dollars, and with two games combining for an even larger total, it’s unsurprising that this slot is one of the more popular slot games from Microgaming.

It lacks the excitement of free spins and other bonus rounds, but when you’re playing off a jackpot as big as this, it shouldn’t matter. The required bet of $3.00 to be eligible for the jackpot might turn away players with a smaller bankroll however, but as they say: you have to be in it to win it.