Motörhead is the latest online pokies game from leading software developer Net Entertainment to be based on a popular rock band, complete with authentic soundtrack for rock’n’roll tunes while playing your favourite games. Does it do the band justice? Read our review to find out.

The Motörhead video pokies game is the third and final instalment in the classic ‘Net Entertainment Rocks’ series – a set of three immersive ‘rock-themed’ online and mobile slots titles that now include Guns N’ Roses, Jimi Hendrix and Motörhead.

Set against a stage back drop with guitars, lights and amplifiers, players can choose to enjoy the game in ‘rock mode’ (with classic Motörhead hits playing in the background) or in ‘regular mode’ (no music). We recommend ‘rock mode’, always.

Motörhead also boasts an auto-play feature. All wins pay from left to right, all wins are multiplied by your bet per line and only the highest wins are paid per line.
All Motörhead symbols include: 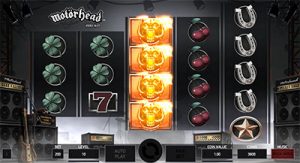 To check the symbol payouts and other game information, hit the ‘i’ button in the lower left hand corner of the game. The coin payout values are based on bet level one.

Motörhead boasts some unique and exciting gameplay features that offer up some huge payouts, as described below:
The Ace of Spades wild: The wild will substitute for all symbols, except the scatter icon, to complete a winning combination.

The skull scatter symbol: Land three scatter icons anywhere across reels three, four and five (in the base game) and you will be rewarded with 10 free spins. During the free spins, the mystery reels (described below) will consist of both wilds and mystery symbols.

The bomber feature: This feature is activated randomly before your spin, in the base game only. When activated, the reels will turn dark, lights will flash, a siren will sound and Motörhead skulls (bombs) will appear across the reels. These skull bombs (at least 10) will then spin and turn into overlay mystery symbols to create some massive winning payouts.

Where to play Motörhead

Motörhead can be enjoyed for real money across multiple gaming platforms, including your laptop, desktop, mobile and tablet devices, at the following regulated and licensed Internet casino sites:

The game can be enjoyed within real money mode and practice play mode.
Each of our endorsed online and mobile optimised casino sites have been tested by the team here at PokiesSite.com.au, and are licensed in their appropriate gaming jurisdictions by the appropriate gaming authorities, including the U.K. Gambling Commission and the Malta Gaming Authority.

The casino sites offer free and enticing welcome promos for new customers in the form of cash bonuses, and a host of other great incentives such as free spins and free entry competition and tournaments with great prizes.

Our verdict on Motorhead

The Motörhead video slot game pays a great tribute to the classic rock band, following the 2015 death of front-man Ian ‘Lemmy’ Kilmister. The band remains one of the most successful and beloved rock and roll bands ever, having released 22 studio albums, 13 live albums, 12 compilation albums, four extended play albums and having sold more than 30 million albums across the world, during a career that lasted 40 incredible years.

It boasts some awesome graphics (including strong flashing lights that the game warns may not be suitable for photosensitive epilepsy), incorporates classic hits from the band (songs listed in the ‘information’ section), owns the unique ‘grid-style’ slot design, offers up some exclusive high paying bonus features, and is the perfect concluding game to the ‘Net Entertainment Rocks’ series.

Combing out love for rock music and gambling, this online and mobile interactive slots title is one that has already become a fan favourite.