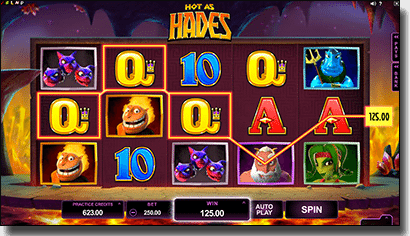 Slots Million are giving players the chance to win a share of $10,000 in prizes just by playing the new Hot as Hades slot, available at the online casino now.

Up until Sunday, August 2 at 23:59 CEST (Aussie players need to check timezone differences) players are given the chance to win an array of the latest Apple and Bose devices just by spinning the reels of Microgaming’s new slot, Hot as Hades.

Win the latest Apple and Bose devices at Slots Million

Five lucky players will win an array of the latest laptops, smartphones, and sound devices from two of the biggest tech companies in the world, Apple and Bose. To become one of these lucky players all you have to do is play $AU80 on the new Hot as Hades poker machine.

For every $AU80 wagered, players will receive a ticket into the draw, which sees five winners drawn.

The five winners will be contacted on August 3 and sent their prizes accordingly.

About Hot As Hades

Not long after Rabcat’s Legend of Olympus was rolled out on Microgaming’s Quickfire platform, which is a slot that follows Zeus on a quest to defeat Hades, the release of Hot as Hades, by Microgaming as hit our favourite web casinos. This one follows Hades mischievous adventures instead but still includes Zeus, along with Medusa, Poseidon, and Cerberus too.

For those who don’t know who Hades is, he was the God of the Underworld, and basically Zeus’s enemy. Microgaming have created him as a cheeky little rock ‘n’ roll character, which may appeal more so to players than the Zeus character in Rabcat’s version.

Featuring 5 reels and 20 paylines, players can bet from $0.01 up to $100 per spin, with the $AU80 required for the above promotion eligible to be wagered over a number of spins.

To kick things off, the base game is quite unique with a Super Mode Free Spins feature activated at random where players receive five free spins. Additionally, players can be granted a Held Wild for the free spins if one of the many characters animates and grants them to you. If you do get the Held Wild feature attached, all winnings during the free spins will be doubled meaning you can win up to 2000 times your initial bet.

Of course the main attraction is the main bonus feature called the Quest for the Crystal Helm Bonus, triggered by at least three Scatter symbols that also act as the Bonus symbol, and is the bull-like Skulls. Here you need to steal the Crystal Helm from Hades and to do so you need to complete five levels (these multi-level bonus rounds are becoming quite popular by software providers recently).

These levels include ‘pick me’ type prizes, with ‘win all’ and ‘end game’ options. Be careful not to click the latter as you won’t make it to the end and win the Crystal Skull which offers you two options to win 260 times your initial stake.

The graphics are incredible and the characters light up your screen as they come to life via animation.

Additionally, this slot includes the ‘Stop’ feature which you can use to stop the reels and try to create a winning combination yourself.

Trying out this new slot all the while winning a share in $10,000 of the latest gadgets seems pretty exciting to us, so if you want to get amongst it follow our links to Slots Million and play today.