Mega Moolah has just gone over the $10 million mark, and all of our favourite Microgaming casinos are offering you the chance to win the jackpot that is continuing to grow. 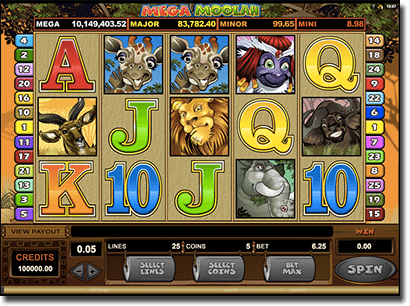 Mega Moolah is one of the most popular online progressives as it is known as a regular millionaire maker. It was only in April that a man by the name of Mark won a massive $CAD 7.5 million and now it is set again to make one lucky player very happy, with the amount reaching $10,149,403.52 at the time of writing.

The reason that the prize pool is so high is that since the last winner’s currency was weaker then the currency that Mega Moolah operates on (1 Canadian Dollar was equivalent to 0.54 Pound Sterling at the time it went off), it reset back at $3,469,553, rather than $1 million. So it has climbed quite quickly to over the $10 million mark.

The Mega Moolah jackpot is linked to all of our favourite Microgaming casinos so you can pick which one you wish to play at including:

Each online and mobile casino is encrypted with modern encryption technology and they all have third party organisations that will have ensured you will be protected while playing, and if you do indeed win the huge jackpot you will be paid playing here.

While we aren’t going to be playing for the graphics, we do need to know how to play the African-themed slot which is actually a pleasure to play due to the HD quality, thanks to Microgaming.

While we spin the 5 reels, featuring 25 paylines, for the major jackpot, we get to enjoy a safari of lions, giraffes, monkeys, and other African animals. Naturally, the lion is the Wild symbol (substitutes for every symbol but the Scatter, which is the monkey), while the Scatter triggers 15 free spins if you spin at least three.

The bonus round is what you are after in order to win the current jackpot. It activates at random, though you do need to be playing the max bet of $6.25 in order to trigger the chance to win. Once it activates you are required to spin a wheel where you could win the main jackpot, or one of the smaller jackpots including the Major, Minor, and Mini prize pools.

You can play Mega Moolah no matter where you are located in the world, and on your smartphone or tablet too, meaning you could pocket the millions just by tapping on your portable device on the way to work.

This is a record-breaking amount for Mega Moolah and will most likely go off any day now, so start spinning the reels and hopefully you will be the next Mega Moolah millionaire. To make the most of your spins, head to 32Red Casino where you can earn double the loyalty points for every real money bet you place on Mega Moolah until the jackpot is won.