The new 24 slot from game developer iSoftBet has been released at Slots Million and to celebrate the online casino is offering players an array of cash prizes over the next few weeks.

The new slot, based on Fox Network’s hit series 24, has just been released at Slots Million, and the team there are offering a 24 day promotion featuring an array of cash prizes from €100, €250 and a huge €1000 on the last day of the promotion.

The promotion kicked off on September 25 and will therefore end on October 19, and all you have to do win the cash prizes is head to www.SlotsMillion.com and play the new iSoftBet slot, with the highest wagering players winning the cash prizes.

About the new 24 slot

Jack Bauer, played by Kiefer Sutherland, is back all thanks to iSoftBet teaming up with Twentieth Century Fox and bringing him to life on the reels alongside the expected weaponry symbols, as well as the traditional 9, 10, J, Q, K and A symbols. Featuring 243 ways to win over 5 reels, 24 offers a huge 125,000 coins if you play the max bet. 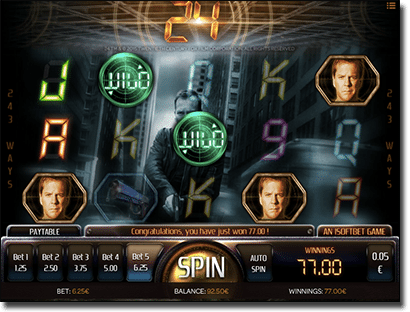 There are three main symbols to look out for however, including the Wild which replaces every symbol except for the Bonus symbol and the Free Spins symbol, to create a winning combination.

The Bonus symbol is another symbol to keep an eye out for with three or more triggering the bonus round where you are required to disarm a bomb. The number of bonus symbols you spin will determine how long you have to disarm the bomb and for every wire you cut you will reduce the time and will either be awarded a random amount between 5x and 100x your bet, or a multiplier between 2x and 10x. Every multiplier will give you an additional minute to disarm the bomb and all winnings are then paid out.

Finally, the Free Spins symbol is the other symbol to keep your eyes peeled for. It can only appear on the middle reel but when it does it will trigger 10 free spins and one of the follow additions;

You can re-trigger the free spins during the Free Spins feature, but you can’t change your bet size here.

So get on over to Slots Million and join Jack Bauer in preventing a bomb attack, all the while going in the chance to win huge cash prizes.