Net Entertainment is one of the best online pokies software providers available. When it comes to their slots catalogue, picking the best can be difficult as they offer countless top notch poker machines. We have found the 10 most popular pokies from Net Entertainment, and each feature a 95 to 98% RTP payout. 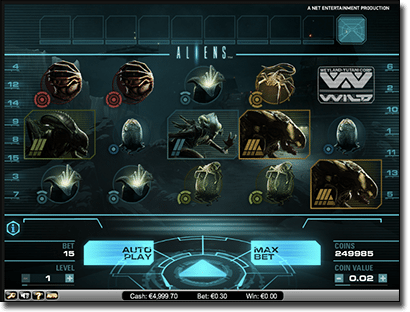 There’s a reason Aliens is first on our list – and that’s because its 3D graphics and audio make it look like a Playstation game rather than a video slot. Originally brought out in 2014 in conjunction with 20th Century Fox and is based on the 1986 movie, Aliens features multi-level bonus rounds and offers more thrilling immersion into Aliens mythos.

As a five-reel, 15 payline pokie, there are less paylines than the average slot machine, but don’t let this put you off as there are some big wins on offer. The main aim of the game, which seems odd to say about a slot, is to survive through multiple levels of attacks from aliens in order to reach the ‘Queen Hive’. There is an Alien Activity Metre which you need to fill in level one in order to advance to level two and it also sets you up in terms of free spins and multipliers.

Once you have advanced to the second level called the ‘Encounter’ you will be taken down a corridor and treated to some sticky wins if you defeat the alien attack. Finally, if you advance to level three you will have five chances to kill the Queen to win big (around 1200 your initial bet), but be careful here as you can be killed too.

Basically, it offers free spins (up to 15) and multipliers that we see in video slots, but it also offers players the chance to have more fun in obtaining them, all the while granting huge wins even if you don’t make it to level three.

Pokies based on films generally seem to be well received, perhaps because movie buffs can get their fix while having the chance to win real money. This slot, Dracula, is based on the 1931 movie and has been created in conjunction with Universal Studios.

Featuring a massive 40 paylines, following Count Dracula isn’t so bad as he offers huge wins and free spins. Additionally it has a 5×4 reel format which is becoming quite a standard slot format by NetEnt in 2015.

In the base game the ‘Bat Feature’ is activated at random, and when this happens bats fly across the reels to turn the symbols ‘stacked’, which can lead to huge wins. 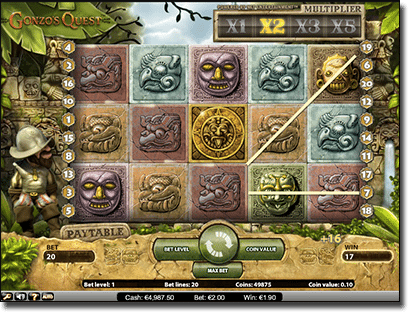 Gonzo’s Quest is incredibly popular partly because of the well thought out theme with stunning 3D graphics and apt audio to match, and partly for the unique Avalanche function.

We follow the historical character Gonzo and his quest to Eldorado in this slot, and he hangs by the reels while you spin, lighting up the reels when you win. Additionally, instead of the reels spinning, they drop, like an Avalanche and are replaced by falling symbols, which is an innovative change to the regular spinning reels.

When you land a win, the symbols explode to make way for new symbols, which creates another chance of a win, without having to spin again. Here, the multiplier increases every time you land consecutive wins meaning if you win three times in a row you will get a 3x multiplier attached to your wins.

Then there is the Free Falls Bonus, triggered by three Free Fall Bonus symbols, where you can win 10 free spins and up to a 15x multiplier.

Gonzo’s Quest has a minimum bet of $0.20 per spin and a maximum of $50 per spin, meaning high rollers might have to look to look to the other pokies listed here.

4. Jack and the Beanstalk 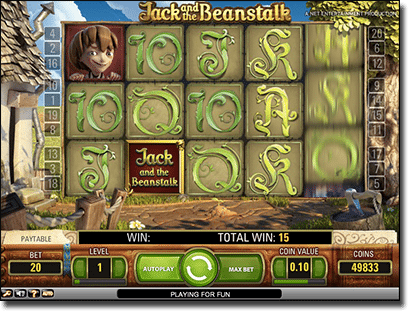 NetEnt have created a 3D slot that is filled with rich graphics and follows the classic fairytale, Jack and the Beanstalk. It features 25 paylines across 5 reels and there are free spins, as well as a unique bonus round.

Next we have the Walking Wild, which sees a Wild (the Jack and the Beanstalk logo) appearing and then walking along the reels for the next spin/s depending on what reel it first appeared on. Any wins with Wilds are tripled.

Finally, we have the unique bonus round, the Treasure Collection feature, that is triggered during the Free Spins round by spinning a golden key on the fifth reel. This bonus round sees players collecting a number of keys to activate Sticky Wilds, Stacked Wilds, and massive payouts. 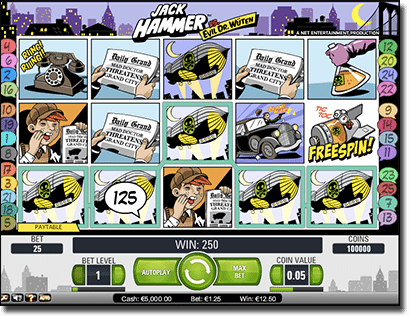 Jack Hammer is based on a character from the Marvel comics and offers a huge maximum bet of $250 per spin meaning it is a good one for high rollers. With only 15 paylines, many opt for Jack Hammer 2, but this one is equally as good if not better. Additionally, it was responsible for introducing the Sticky Win feature to the online pokies world.

The Sticky Win feature is activated by three free spins symbols in a winning payline and these symbols stick around for re-spins to create even more wins. If ceases once there are no more wins left.

The slot makes you feel like you are reading a comic book, while the free spins offer are quite generous. The minimum bet per spin is $0.25, while the maximum is $250, as previously mentioned. 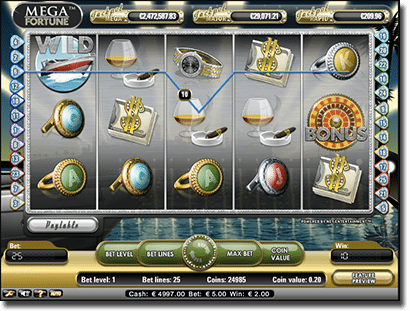 Mega Fortune is one of NetEnt’s most infamous progressive jackpot games as it made the Guinness Book of World Records for the largest win on an online slot in 2013, so you can imagine it has been very popular ever since.

There are three jackpots, the Mega, which is the largest one, then the two smaller Major and Rapid jackpots. Players spin three ‘Wheel of Fortune’ type wheels in order to win the jackpot.

The slot is also a standard video slot featuring 25 paylines over 5 reels, with free spins and a 5x multiplier available too.

The minimum bet for Mega Fortune per spin is $0.25, while the maximum is $50, which isn’t huge meaning to win big you don’t need to bet big. Interestingly, the man who won the largest online jackpot ever only played the minimum bet per spin. 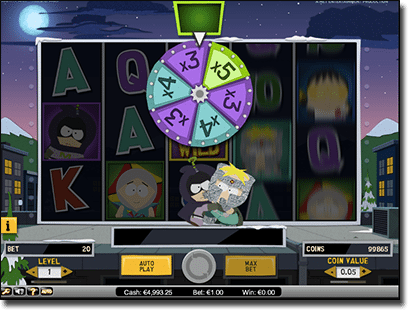 You either love or hate South Park, but there are countless features on this slot regardless the side of the park you sit on. If you do love South Park, it is as though you are watching an episode when playing this slot, meaning it can be quite entertaining. If you don’t, you can always mute the sounds and take advantage of the features on offer.

The best part about this slot is that there are four mini features and a main bonus round. The mini features include Cartman’s Stacked Wilds; Kenny’s Multiplier feature with up to a 5x multiplier available; Stan’s Multiplying Re-Spin feature which continues until you win, with a progressive multiplier available for no win spins; and finally Kyle’s Overlay Wilds feature, which sees five Wilds available to create huge wins.

The main bonus round, the Mintberry Crunch Epic Bonus Spins feature, that is activated by three Bonus symbols (the symbol with ‘Bonus’ written on it) appearing on the first, third and fifth reels, pays out up to 260 times your initial bet.

Spinata Grande was released in 2015 and it features the 5×4 format that Dracula includes. It also has 40 paylines and an innovative feature called Colossal symbols.

We follow a Mariachi band which bring out their trumpets every time you score a win, and the Mexican theme definitely gets you pumped.

The Colossal symbols make this slot, as they appear as big 2×2 or 3×3 versions of the regular symbols and payout up to 600 times your bet, which can see huge winnings after landing them multiple times.

These symbols also transform into a mini-slot on the reels as one of bonus features, aptly called the Mini-Slot feature. The mini-slot has cash prizes on offer and players can trigger the Free Spins round here.

The minimum bet per spin is $0.20, while the maximum bet is $200 per spin, making it another good slot for high rollers. 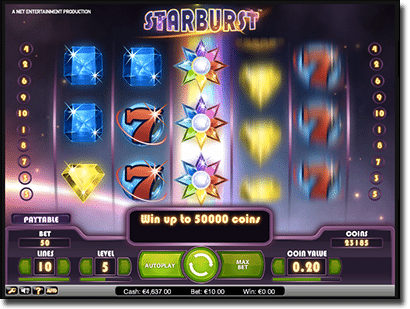 This one is incredibly popular with online casinos regularly offering free spin promotions for this slot. But it isn’t just popular with Internet casinos, rather it is also popular with players and this is because while there are only 10 paylines and just one bonus feature, there’s 50,000 coins on offer to be won.

Featuring an Expanding Wild, players will see an entire reel turned Wild if the Expanding Wild symbol appears on the second, third, or fourth reels and it will remain for three more spins. This is where you can win the 50,000 coins, but you can still win big during the base game too.

This slot is incredibly simple and while there are a lack of features, it seems easier to win big. The minimum bet per spin is $0.10 and the maximum is $100.

Another 2015 release, Stickers has been well received and has thus made it to our top 10 NetEnt pokies.

Despite its simplistic theme that pays homage to the classic fruit machines, and the lack of free spins, Stickers offers players the chance to win 80,000 coins.

It is quite similar to Starburst so it could be a good slot to start off with, or suited to a player who likes to win without too many added features.