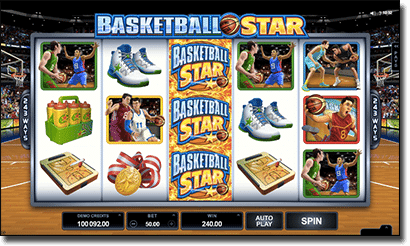 The new Basketball Star slot from Microgaming was released just last week and Guts Casino want to ensure that if you don’t get a slam dunk you will see one – courtside in New York.

The multi-software powered casino is offering players a chance to win a five night trip for two to New York featuring courtside tickets to the New York Knicks vs Brooklyn Nets game, as well as spending money, while two runner ups will receive an Apple prize package.

All you have to do to be eligible for this incredible promotion is play Basketball Star from Microgaming up until November 25.

On top of this incredible prize, players can go in the running to win a cash prize with two available draws over the course of the month valuing a total of $2500.

To take part in the New York/Apple prize package draw and the two cash draws, all you have to do is wager $25 on the latest release from Microgaming to earn a ticket into each draw.

Four lucky winners will win a cash prize on the following dates;

While the main prize draw will take place on November 26, with the following prizes on offer;

The more you play (in $25 increments) the more tickets you will receive, and ultimately the more chances you will have of winning one of the many prizes on offer.

There are 10 in-game achievements waiting to be unlocked on Basketball Star – a feature that Microgaming includes in many of their slots.

Unlocking in-game achievements see players matching at least three symbols and with 10 different symbols available on Basketball Star, there are 10 different achievements to be unlocked. You can track how many you unlock in the paytable and once you’ve unlocked them all you will receive 250 free spins.

Simply match three to five of the following symbols to win the corresponding amount of free spins;

Unlock these achievements on both your desktop device and smartphone or tablet to have two chances at winning 250 free spins (that’s 500 free spins for anyone who hasn’t had their morning coffee just yet).

Your free spins will be credited to your account the following day or on Monday if you play over the weekend.

If you aren’t a member of Guts Casino, now is the perfect time to sign up and get spinning the reels of Basketball Star to win a trip of a lifetime. You can also join in on the ongoing Guts.com $15k lottery giveaway promotion in October.