The September release of Microgaming’s new sports themed pokies Rugby Star was launched in conjunction with the 2015 Rugby World Cup, alongside plenty of promotions such as Slots Million’s multiply your winnings with every football goal comp. Now, Guts Casino is giving players even more of a reason to get into the rugby spirit.

Guts has tailor-made a fantastic new promo that sees punters unlocking certain achievements the more they play Rugby Star for real money. The prize? A double ticket to the Rugby World Cup Grand Final in London on the 31st of October, with $1,500 in spending money to make sure the day is packed with indulgence.

On top of that there’s loads of free spins to pick up along the way, so if you’re looking for an online casino to play the Rugby Star slot, Guts will give you more bang for your buck as you spin those reels.

The promotion is running from the 17th of September to the 4th of October. To take part all you need to do is sign in and play Rugby Star for real money wagers. If you’re not yet a member, sign up at Guts.com and take advantage of a $400 welcome bonus plus 100 free spins on Starburst.

So, how exactly does this promo work? For every specified payline match you make, you’ll earn an in-game achievement, making you eligible for free spin rewards and one entry draw for a double pass to the World Cup Grand Final.

The first player to unlock all of the Rugby Star achievements will win a double pass, while an additional player will be drawn at random. Both winners will also be awarded with the $1,500 spending money. Check out the image below for the full list of the achievements and their adjoining free spins: 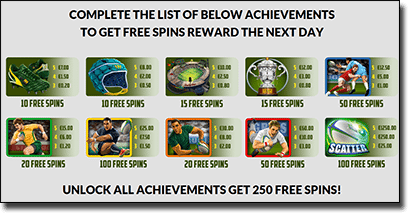 Rugby Star is available for both desktop and mobile play with achievements registered separately for both forms of play. This means you can use your computer to unlock all the achievements, then play on your smartphone or tablet to unlock them again, giving you double the chances to win the grand prize.

You can check your achievement progress at any time by opening Rugby Star and clicking on the ‘pays’ arrow on the right hand side of the game screen. All of the highlighted achievements are the ones you’ve unlocked so far.

Eligible free spins are awarded to your account the following day and can only be used on the desktop version of Rugby Star. You only have seven days to use the free spins before they disappear from your account, so don’t delay.

The major prize winners will be drawn on October 5th and all winner notified by October 8th.

Rugby Star is a five reel, 243 ways to win pokies from the legends at Microgaming. The game offers many exciting features including stacked wilds, free spins, multipliers and the unique wild pass feature that randomly turns the middle two reels into wilds in order to create some massive wins.

Playing at Guts Casino means you’re not only eligible for the promotional prizes, but some big wins within the Rugby Star game itself, with a jackpot of 120,000 coins up for grabs.

Looking for other new pokies releases? Check out the upcoming 24 video pokie by iSoftBet, based on the popular television show, or the newly launched Koi Princess by NetEnt, impressively stylised after popular anime productions.